The church/school was built in 1861 and is located two kilometres from the present village of Springton. In the 19th century the main road used to go past the building, unlike now. Before the Friedensberg ("Hill of Peace") congregation was formed, the locals had to travel 20 km by bullock cart or German wagon to worship at Blumberg (now Birdwood).

The land for the church and school was donated by the wealthy businessman George Fife Angas (he also donated £50 towards the construction costs). The land also included space for the cemetery which is located a few metres down the hill from the church. 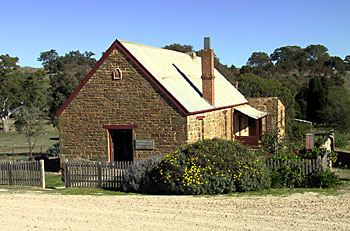 During the week the building functioned as a school room, and on Sundays the furniture was re-arranged for church services. Until 1876 all lessons were held in German, but in that year a two-hour daily session of teaching English was started by teacher F.W. Baumann's daughter Anna.

All sixteen children of Friedrich and Caroline Herbig attended the Friedensberg school, as did 25 of the 51 grandchildren.

When the St. Johannis church was erected in the town area in 1889, the building continued to be used just as a school until 1913, when a new school, also named "Friedensberg", was built close to the St. Johannis church. In the 1990s the original Friedensberg school/church was restored with financial assistance from the State Heritage Branch and the State History Trust.

Most students started attending school at seven years of age and left after their church confirmation at around thirteen. Some students had to walk a long way to school. In the early years of the 20th century Ben Herbig attended the school and recalled that:

"We'd usually walk up the main road past the Herbig tree and then cut through the old Herbig farmyard where Christian Kuchel was living. Sometimes there were swaggies camping in the tree - as many as six or seven. We were a bit scared so we'd leave the road and go into the paddock giving them a wide berth."

Some children came to school barefoot in summer and in winter because they couldn't afford boots. School started at 9am and the morning lessons covered religious studies, German grammar and script (handwriting). These subjects were taught in German. After lunch reading, writing, spelling, maths, history and geography were taught in English. Both German and English songs were taught and sung. 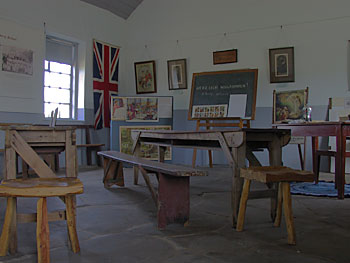 Linda Riedel and Elva Starick also attended the school early in the 20th century, and when asked what language the students used at break times, said:

"We spoke English. Of course it depended on which language was mainly spoken at home. Our parents were in business so they spoke mostly English, but a lot of the farmers still spoke all German at home, so their children spoke German. It was a bit of a mixture. Sometimes a question would be asked in German and the reply made in English or vice versa."

The cane was used often, but with little obvious effect on behaviour. Bertie Kalms had once been given a 'real good hiding' with the cane. When he rejoined his classmates he said: "Das schmeckt gut!" (That tasted good!). The teacher heard that and gave him another caning.

Friedensberg is open to the public on the first Sunday of each month from 1:30pm to 4pm, and admission is by gold coin.
School groups or other groups can visit by appointment. Sets of educational booklets about the school and showing samples of original student work are made available to student groups during the visit. For $4 per student school groups can have a guided tour of three sites: the Herbig Tree, Friedensberg School and the adjacent cemetery. The price per visitor includes a copy of the book "School Days at Friedensberg", valued at $2.