The Effects of the First World War on Australia's German-speakers

Prussia/Germany won the Franco-Prussian War of 1870-71, and Germany became a new major power in Europe. There was a new patriotic feeling among Germans in Australia. The two Australian place names 'Sedan' (name of a battle in the Franco-Prussian War - won by the Prussian/German army) and 'Bismarck' (Imperial Chancellor in Germany - leading politician) originate from this time. More than anything else the German navy expansion aroused suspicion and mistrust in Australia as in England. There was a "German Fleet Association" (Deutscher Flottenverein) in Brisbane in 1899! People claimed that German agents were behind all the problems in the British Empire: uprisings in India, civil war in Persia, unrest in Egypt. 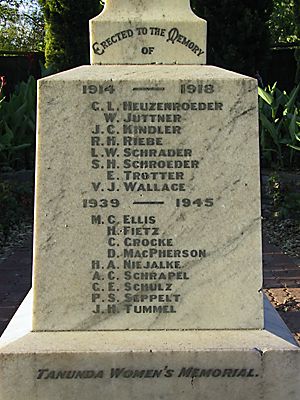 The population of Australia in 1911 was 4,455,005. In Australia there were about 100,000 Germans in 1914. The First World War was a very difficult time for German-Australians. Before the war they were greatly respected. Between 1839 and 1914 German-Australians made a major contribution to Australia, particularly in South Australia (in 1900 almost 10% of the population of S.A. were German-Australians). Then Germany was the enemy in the war, and with the anti-German atmosphere in Australian society many British-Australians forgot this large contribution, and believed that the Germans in Australia fully supported the German Kaiser (emperor). German-Australians were proud of their heritage and culture but politically they were, with few exceptions, loyal to Australia. Most British Australians found it difficult to make this distinction. Many German Australians were in the Australian army and fought and died for Australia. On the war memorial in the public gardens of Tanunda (Barossa Valley) are the names of eight soldiers who fell in the war. Six of them are German names.

It's ironic that General John Monash was Australia's most famous commander in the war, and that he was popular with his soldiers. He was the son of German-Jewish immigrants (the family name was originally Monasch) and he wrote letters to his father Louis in German and had participated in German club life in Melbourne. His parents named their first cottage in 1871 in Richmond "Germania". Australia's legendary military tactician was appointed commander of the Australian Army, which was created in 1918 by the amalgamation of all five Australian divisions in France. (Read British General Montgomery's opinion of Monash.)

Apart from Aboriginal Australians German Australians were among Australia's first patriots. As early as the year 1855 a Mr Kramer told a meeting in Lobethal in South Australia:

"There should be no Englishmen, Irishmen, nor Germans, but all South Australians."

"The people didn't know what to do", my father answered when, as a child, I questioned him about the ill-treatment of a German in his town. "We hadn't had a war before this."

The German Club House in Broken Hill, NSW, was attacked in January 1915.
The building had been unoccupied since the outbreak of war.
(Broken Hill Historical Society)

The mayor of Rainbow in Victoria's Mallee region had to resign because he was German Australian. This happened to mayors and councillors elsewhere also.

German schools had to close. German was forbidden in government schools. The Premier of South Australia said that the Education Department must not employ anyone of German background or who had a German name. Most people had a negative attitude towards the German language, however, the Education Minister in New South Wales, Arthur Griffith, said on the 29th June 1915 in the NSW parliament:

"I might remark that we are at war with the German nation; we are not at war with German literature."

In South Australia all 49 Lutheran schools were closed in 1917. After the winter break many of these were re-opened as state schools in the same buildings (rented by the Government from the congregations), with new teachers. This sudden change was traumatic for the youngest children particularly, as they couldn't understand why the Government would want to do it. From then on the students had no more German and Religion lessons.

The nationalist fervour of the time helped to increase the sales of Australian lager beer, as fewer imported German beers were sold, which had enjoyed a good reputation up until then. The Australian Brewer’s Journal wrote:

The Teutonic brands which have been exported here by the enemy are taboo. Our lagers are equal if not better than their fancy brands.

In 1916 the Upwey Progress Association (east of Melbourne) asked for a street lamp to be removed because it had the words "Made in Germany" on it.

St Kilda Football Club changed its colours in 1915 from red-white-black (same colours as the German imperial flag - see the Flags of the World website) to the black-gold-red of Belgium's flag. St. Kilda reverted to the original colours later.

Matilda Rockstroh, who worked in the post office within the St Kilda railway station in Melbourne, Australian-born and in the public service for 37 years, with no evidence of any disloyalty, was moved out of her position because of her background. She was no longer allowed to have contact with customers.

Edmund Resch, the founder of Resch's Beer in Sydney, was interned. He had lived in Australia for 50 years.

It is interesting to note that Adelaide, the name of the capital of South Australia, was originally German. Read about the name Adelheid. The government in South Australia did not change this place name of German origin. 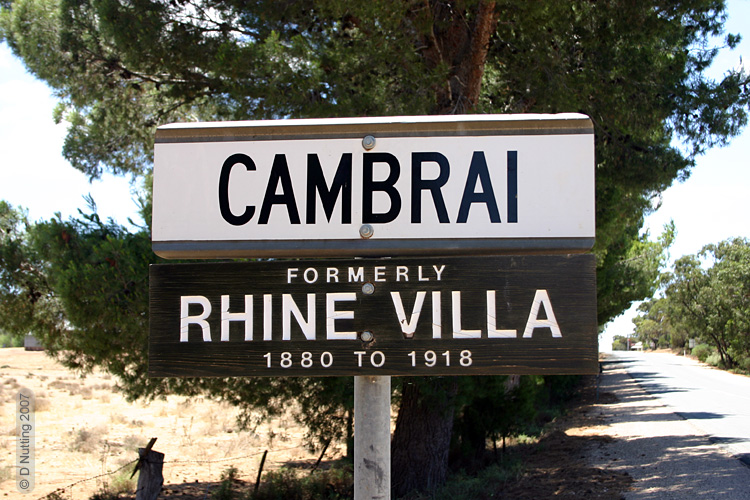 Place name sign in Cambrai, a village located east of Eden Valley and 9 km south of Sedan in South Australia. The original name of the place was Rhine Villa. The new name Cambrai referred to a battle in France in 1917 during the First World War.

Many German Australians changed their name. Paul Schubert, teacher at Sturt Primary School in Adelaide, had to change his name in order to keep his job. He became Paul Stuart in 1916. 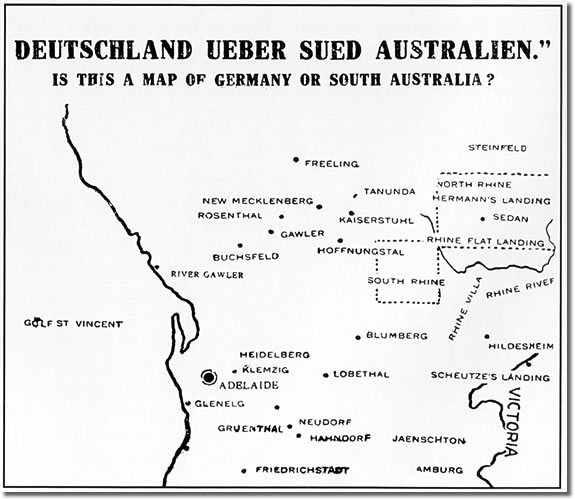 An amendment to the "Aliens Restriction Order" on 28th July 1915 prohibited enemy aliens and naturalised subjects from changing their name or their business name.

In The Australian People and the Great War, Michael McKernan wrote in 1984 that up until 1914 the German-Australians "had been admired and respected. But the Australians, so heavily committed to the war emotionally, needed to manufacture a war close at hand lest their knitting and their fund-raising be their only real war experience. The German-Australians became the scapegoats for Australia's fanatical, innocent embrace of war."

Jürgen Tampke of the University of New South Wales and Colin Doxford wrote in 1990 in the book Australia, Willkommen that "observers in the German Foreign Office in the years after the First World War were convinced that in all the British Empire the hatred of the 'Huns' was strongest in Australia. Speculating why this might be the case, they thought that the answer could lie in Australia's geographical and cultural isolation from Europe. It was believed that the Europeans, accustomed to centuries of warfare, had been forced to realize that they must overcome the scars of war." (page 205)