German Settlement in New South Wales in the 19th Century

Up until Victoria's separation (1851) and Queensland's separation (1859), the whole eastern side of the Australian mainland was the colony of New South Wales. As the oldest white-settled part of Australia, the area of the present-day state of NSW had a high proportion of British settlers before any groups of German-speaking immigrants arrived, and it was difficult for non-British immigrants to establish their own settlements, especially as large areas of land were under the control of large sheep farmers (squatters).

However, the squatters needed labourers, shepherds etc for their large properties. Since convict transportation to NSW had been abolished in 1841, landowners found it hard to keep workers, who were always moving on and looking for higher pay, as there was a shortage of workers in the colony. This worker dissatisfaction was especially common among English immigrants. During his early travels in the settled areas of the colony the explorer Ludwig Leichhardt noticed this, and thought that if German immigrants were brought in they would be more likely to settle down and work for a better life than they could have had in Germany. Leichhardt saw many fertile properties lying unproductive because the owner could not pay the wages demanded.

Many landowners were also experimenting with wine-production, and the specialised skills in wine-making (e.g. vine-dressers, barrel-makers etc.) were not available from Britain. The Macarthur brothers asked for special permission to bring in immigrants from the European continent. In 1838 William Macarthur brought six wine-growers and their families from the Hattenheim area in the Duchy of Nassau to improve his vineyards. He won awards in London in 1841 for the wines and brandy that he exhibited.

Landowners still needed cheap, reliable labour, and the NSW Government contracted Wilhelm Kirchner, the Hamburg Consul in Sydney, to go to Germany and recruit immigrants. He succeeded, and in 1849 600 Germans arrived in Sydney (about 104 families) from Silesia in south-eastern Germany and from south-west Germany, where economic circumstances were making life very difficult. In order to promote NSW more widely in Europe, Kirchner published a book in Germany in 1848 entitled Australien und seine Vortheile für Auswanderer (Australia and its Advantages for Emigrants). Of course Kirchner's book was full of praise for life Down Under. The 1850 edition included letters written by German settlers in various parts of NSW who had arrived as a result of his work in Germany. As a result of Kirchner's efforts, another wave of German immigrants arrived in the 1860s, settling in the Illawarra district and around Albury on the Murray River.

Local Intelligence ... Preaching in German: on Sunday last the German population of Albury were greatly surprised and much delighted in hearing for the first time the Reverend C. Twomey, Roman Catholic clergyman, preaching a sermon in the German language. The Reverend gentleman being newly appointed Parish Priest of this district and finding that a great proportion of the German community did not understand English, thought it necessary to study the German language. Last Sunday's sermon was the fruit of about four months study and perseverance. The German portion of his flock will long remember the impression made on their minds by their new pastor, this being the first time many of them had the pleasure of hearing a sermon preached in their native tongue.

(Ad in Australian newspaper "Australische Deutsche Zeitung", 4/11/1870)
The first homogenous German settlements in NSW were established when in the late 1860s Germans from places in South Australia such as Mt Gambier, Lights Pass and Ebenezer moved across to the Albury area. In South Australia the land in some districts was no longer suitable for farming - artificial fertilizers were not yet invented. Many farm holdings were too small for Australian conditions. However, in the area around Albury new land became available. The journeys of these South Australian Germans took the form of treks, with large numbers of families, in search of more and better land, followed each other in loaded wagons. A good description of one such trek in 1868 is recorded, of 56 people travelling in 14 waggons and two spring carts, with some farm animals. This group of migrants from South Australia were mainly of Wendish background. They mainly followed the Murray River to Albury, and had made arrangements in advance for a Murray paddle steamer to drop food along the way for their animals, and to take some farm machinery for them. Along the way they met small groups of Aborigines, and stopped every Sunday to hold church services, and after five-and-a-half weeks of travelling they rolled into Albury on the 19th November, to an excited welcome from the people of the town. They moved on, and when they had found suitable land they named the new settlement Ebenezer (in memory of the place they'd left in SA), but later it was changed to the present name of Walla Walla, as an Ebenezer already existed in NSW.

Other German South Australians arrived after similar treks and by 1872 there were four German settlements in the region: Jindera, Bethel, Ebenezer (Walla Walla) and Gerogery. Further north more Germans established settlements in the 1880s at Wallendool (Alma Park), Dudal-Cooma (Pleasant Hills), Munyabla, Mangoplah and Edgehill. In the 1890s smaller settlements with Germans developed at Milbrulong, Henty, Uranquurty, and in the first few years of the 1900s at Temora, Bulgandra, Ungarie and Gilgandra. Settlement occurred on the southern side of the Murray at Middle Creek (Barandudah) and Yackandandah. English farmers were often living alongside the Germans in some of these places. 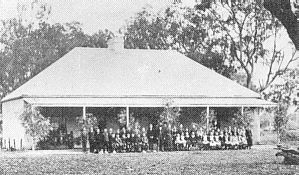 (Ad from Australian newspaper: "Germania, Allgemeine deutsche Zeitung für Australien" 24/3/1864)
German tradespeople and professionals did arrive in Sydney and stay put, however their numbers were small compared to the overall population of the city, and they therefore never had the strong profile in the city which Germans had in Adelaide, for example (where in 1900 it was possible to do all your shopping in the German language). The number of Lutherans in Sydney meant that it wasn't until 1882 that a Lutheran church was built there, whereas Melbourne's Dreifaltigkeits-Kirche (Trinity Church) at Eastern Hill was in use in 1855. Adelaide, Melbourne and Brisbane each had one or more Lutheran congregations almost from the beginning of German immigration in those colonies.

In other Australian colonies the land was still being opened up when German immigrants arrived on the scene and they were the first white settlers in several areas, but in NSW the good land was largely already taken, and German group settlements could only be established at places far from Sydney like the Riverina, by Germans coming from SA. Therefore, although very many Germans settled in NSW, they were dispersed around the colony in contrast to the Germans in South Australia and Queensland. German Catholics and Lutherans also intermarried to a greater extent in NSW, meaning that generally no closed Lutheran settlements such as in SA were established.

Map: Distribution of the Germans in NSW around 1900 (from: Borrie, Wilfried. 1954. Italians and Germans in Australia / A Study of Assimiliation. F.W. Cheshire, Melbourne).