* You can search this page for a specific year or person by using the combination of the keys Ctrl F on your keyboard.

2000 refugees from central Europe were shipped to Australia from Britain on the Dunera. Despite the fact that they had fled persecution in the Reich it was thought that some could be agents to assist a German invasion of Britain. They weren't treated well by their British guards on the ship.
More...

665 German Templers were transported by ship from Palestine to Australia and placed in the Tatura internment camp in northern Victoria for the remainder of the war. The Templers (Deutscher Tempel) are a religious community formed in Württemberg in 1861. They were a close-knit religious community who decided to emigrate to Palestine in 1867 in order to create their ideal religious community in the Holy Land. Several Templer colonies arose there over time.
More on the Templers...

Apart from the Templers the Tatura internment camp also contained German missionary families from north-eastern New Guinea, German prisoners-of-war, German businessmen in Australia when the war started, and Germans and Austrians who had left Europe to escape from Nazi persecution. After WW2 most of the Templers elected to stay in Australia, and the new state of Israel paid compensation to them for their former assets in Palestine. The Templers established a number of community centres after the war.

In August the Australian Government started making a distinction between "enemy aliens" and "refugee aliens"; the latter were now required to register for military service, though it was in non-fighting roles. Refugees saw that the Government at last recognised them as anti-Nazi.

In December the Australian Government gave refugees who had lived in Australia for more than five years the right to apply for citizenship. 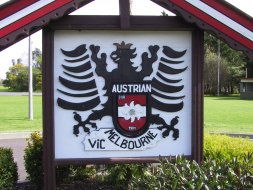 Around the middle of the year Mark Siegelberg and a group of Jewish Austrian refugees in Melbourne formed "Friends of a Democratic Austria", and received special permission from the Australian Government to send Christmas welfare packages to civilians in Austria, a country that Australia was still officially at war with. Most of the founding members of the organisation were 38ers who had come to Australia via Shanghai. In 1947 the group prepared to dissolve itself, as there was no longer need for special government permission for contact with Austria; however, members decided to convert the group into an Austrian Club. Initially members met once a month with a focus on cultural activities such as appreciation of classical music, but over the years the emphasis has turned to social events involving traditional Austrian dance bands etc, and building works on the Club's large complex at West Heidelberg began in 1984.

Other clubs that formed are: Austrian Club (Sydney, 1961), Austrian-Australian Club (Canberra, 1970), and The Old Austria Club of Western Australia (Perth, 1970). These clubs promote Austrian folkloric groups and have performances by Austrian groups from Australia and Austria.

On July 21st the Australian Federal Government signed a pact with the International Refugee Organisation to re-settle displaced Europeans. In the aftermath of WW2 millions of Europeans were homeless, including many ethnic Germans who had been living in German territories in eastern Europe for generations but had been forced west by the Russian army. Australia took more displaced Europeans than any other country except for the USA, and these included many Germans.

The Austrian architect Harry Seidler arrived in Australia, joining his parents. After the 1938 Anschluss he had gone to England to study; his brother was already there. In May 1940 they were shipped to Canada for internment as enemy aliens, spending 17 months in a camp. Harry Seidler studied architecture at the University of Manitoba. During his career in Australia he designed many great buildings, including the Australia Square and MLC Centre in Sydney, the Shell headquarters in Melbourne, the Riverside Centre in Brisbane, the Commonwealth Trade Office complex in Canberra and the Australian Embassy in Paris.

After World War II the Tasmanian Hydro-Electric Commission (HEC) began an expansion of its hydro-electric scheme. Beginning in 1950 the HEC sent staff to Germany to recruit labourers to work on two-year contracts. The HEC paid for their travel to Australia and the cost of this was deducted in instalments from their pay over the two years. The HEC only recruited single men, who lived in very simple huts in construction villages in places such as Butler's Gorge, Bronte Park, Trevallyn and Liawenee (one of the coldest spots in Tasmania). Most Germans could not speak much English when they arrived, but Clause 6 of the employment contract committed the worker "to learn to speak and understand English", and lessons were run in the HEC construction camps. Many German hydro workers stayed and married Tasmanians, and encouraged their brothers to come to Tasmania too. The German-born population in Tasmania increased between the years 1947-1954 from 171 to 1794 persons. The increase in the 1950s had a lot to do with the arrival of contract workers for the HEC.

In the 1950s many of the German-speaking immigrants, whose ship journey was subsidised by the Australian Government, were also employed in the construction of the huge Snowy River Project. This was one of the world's greatest engineering projects of the second half of the 20th century. The river in the Australian Alps on the NSW-Victorian border was diverted inland through hydro-electric power-generating stations, then into the Murray River so that the water could also be used for irrigation of inland farms. German-speaking migrants worked alongside Australians and migrants from many other European countries. Walter Dieseldorf, an Austrian 38-er, was a Senior Executive Engineer on the project.

On the 29th of August the Australian Government signed an emigration agreement with the government of West Germany. This agreement allowed 10,000 Germans to emigrate to Australia in 1953. The quota of 10,000 was to consist of 4,000 workers (3,000 from agriculture and 1,000 skilled industrial workers) and 6,000 family members of those workers. At the time West Germany faced great unemployment (its "economic miracle" of the 50s and 60s hadn't kicked in yet) which was worsened by the influx of many East German refugees who were dissatisfied with developments in that communist state. Through the Intergovernmental Committee for European Migration the Australian Government agreed to take a limited number of Austrian rural workers and their families. In 1953 this agreement was extended to include East Germans and changed to remove its limitation to rural workers. By 1961 109,315 Germans were living in Australia.

On the 9th July the Federal Republic of Germany (West Germany) opened the first German embassy in Australia, at Sydney (relocated on 1st December 1955 to Canberra). Dr Walther Hess was the first ambassador.

Many new Swiss, Austrian and German clubs were formed in these years, eg Rhein-Donau Club in Perth, Austrian Association of SA Inc., the Harmonie German Club in Canberra, German-Austrian Society of Australia Ltd in Sydney, Germania Club in Newcastle, Club of Donau-Schwaben in SA (1972).

Between October 1951 and February of this year the "Jennings-Germans" arrived in five groups. They were 150 builders recruited in Germany by the Australian construction company A. V. Jennings due to a shortage of labour here. Jennings had a contract from the Australian Government to build 1800 houses in Canberra. Most of the so-called Jennings-Germans stayed in Australia after their two-year contract. 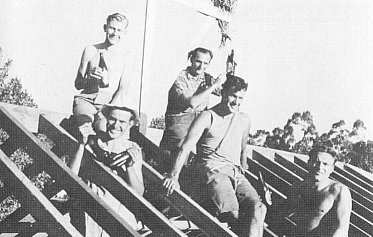 A group of Jennings-Germans build a house in Canberra. The little bush at the top of the roof is an old tradition among German builders.
More about the Jennings-Germans...

A large number of Austrian builders and carpenters came to Australia to set up pre-fabricated houses at West Heidelberg in Melbourne. The houses were imported from Austria for the Olympic Village being established for the 1956 Olympic Games. At the end of their contract they had the option of staying in Australia, and many did so.