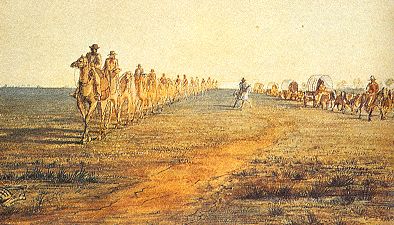 Above, Becker's watercolour "Crossing the Terrick-Terrick Plains", 1860. The picture, looking south, shows the expedition crossing the plains north of Bendigo on 29th August 1860. Terrick-Terrick was a pastoral run near the present-day town of Mitiamo. The group is in two lines to keep the camels and the horses apart, Burke's white horse is in the middle and Becker himself is on the second camel.

The Royal Society of Victoria's Exploration Committee organised the expedition. Ferdinand Mueller was a member of the Committee and was not in favour of Robert O'Hara Burke as leader and was keen to get the experienced South Australian explorer Peter Warburton to be leader, but he declined. However, Georg Neumayer, another influential German on the Committee, was in favour of Burke. 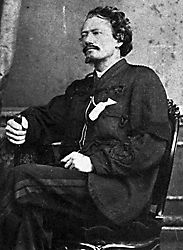 One of the 15 applicants for the position of expedition leader was Gustavus Ferdinand von Tempsky, a Prussian born in an aristocratic family at Braunsberg in 1828. He claimed to have 13 years experience of all types of travel, "on foot, on horseback, with waggons, in canoes, at sea or on rivers". He had "fought Indians, Blacks, White and Redskins", and had developed the skills for "commanding men and keeping them in good order". He had been educated in a Berlin military academy, and at the age of 18 had been given leadership of an expedition to establish a German colony on the Mosquito Coast of Nicaragua. Through the late 1840s and the 1850s he had an adventurous life in Central America and on the Californian goldfields. Photo at right: Gustavus Ferdinand von Tempsky, 1858. (Alexander Turnbull Library, National Library of New Zealand, Te Puna Matauranga o Aotearoa.)

In 1858 he travelled to Victoria and went to Bendigo, however he didn't get lucky - the days of the easy-to-find alluvial gold were over. He was almost penniless and, though a talented artist, made very little money doing miniature portraits around Bendigo. Von Tempsky was keen to lead the Victorian Exploring Expedition and many members of the Exploration Committee were impressed with him. In the final round of the selection process it was between von Tempsky and Burke. Burke had the advantage of the support of J.V.A. Bruce, a Victorian tycoon and member of the Royal Society, who was used to getting his way and did a lot a wheeling and dealing behind the scenes to get votes for Burke. Even though British expeditions in Australia, Africa and South America from the late 1700s onwards frequently had German members (especially scientists) on board, the Exploration Committee probably found it difficult to appoint a foreigner rather than a Victorian colonist as leader of the first major expedition mounted by the colony. The Committee lost interest in von Tempsky after Burke was appointed, so he didn't even take part. He went to New Zealand when gold was discovered there and died in the Maori Wars as the leader of a government guerrilla unit. A street in Hamilton on the North Island is named after him.
More about von Tempsky (Working Class Encyclopedia)...

Hermann Püttmann, editor of the Melbourner Deutsche Zeitung, did not think the expedition would be successful, as Burke knew nothing about science or about the Australian outback.

The Director of the Melbourne Observatory, Georg Neumayer, had considerable influence in the Exploration Committee, and his great friendship with William Wills (who worked for him at the Observatory) made it easy for Wills to get a place on the expedition.

Hermann Beckler, the expedition doctor and botanical collector, was born in 1828 in Höchstädt an der Donau, Bavaria, and after completing his medical training in Munich he boarded the Johann Cesar Godeffroy, reaching Moreton Bay on 2nd February 1856. He lacked the money to buy the necessary doctor's licence for NSW and to buy medical equipment, and soon he lost interest in working as a doctor, and his passion became collecting new botanical specimens. This eventually brought him into contact with Ferdinand Mueller in Melbourne. In January 1859 he went to Melbourne, worked with Mueller, and joined him on excursions collecting plant specimens in south-eastern Australia. At least 13 plants have been named after Beckler. At times he felt like leaving Australia for other places in the Pacific, but he changed his mind, and it was his medical skills as much as his botanical skills which got him a place on the Burke & Wills expedition, plus the important fact that Neumayer recommended him to Burke.

Wilhelm Brahe (picture at right) arrived in Victoria in 1852 and worked mainly as a gold miner, carrier and drover. He was appointed to the expedition mainly through the influence of Georg Neumayer, who knew his brother Wilhelm Alexander Brahe well. Wilhelm Alexander Brahe was the lawyer for Melbourne's German community and a founder member of the Deutscher Verein (German Association).

On Saturday 18th August Robert O'Hara Burke and other Anglo-Australians connected with organising the expedition attended a farewell hosted by Melbourne's Deutscher Verein. This farewell celebrated the German contribution to Australian exploration, the German members of Burke's party, and the Verein's part in the organisation of the expedition. Many speeches were made, and the first toast was proposed by Georg von Neumayer to Burke. Burke did his reply speech in German. The landscape painter Eugène von Guérard proposed a toast to "The Unity of Action of Germany and England". Apparently a lot of drinking was done.

Ludwig Becker was the only member of the Royal Society to go on the expedition. He had an established reputation in Melbourne as a scientist and artist. He had twenty-six scientific papers published in Germany, London, Hobart and Melbourne which were about such varied topics as ornithology, zoology, astronomy, mineralogy and geology. Becker's biggest rival for a place on the expedition was another German, Gerhard Krefft, who was much younger and had exploration experience. However Krefft withdrew his application when he received the permanent position of Assistant Curator at the Australian Museum in Sydney. In 1860 Becker was already 52 years old, but had accompanied Ferdinand von Müller (the Victorian government botanist) and Georg Neumayer on journeys in Australia; Müller and Neumayer supported Becker's application for the expedition. Robert Burke did not want Becker on the expedition, but Becker had powerful supporters, including the Governor of Victoria, Sir Henry Barkly. Burke thought it would make the trip to the Gulf of Carpentaria look easy if a 52-year-old completed it. Burke gave Becker an unfair amount of hard physical work in an attempt to make him quit, despite the fact that Becker had been appointed to the expedition as a scientific officer. Becker still managed to find the time and strength to complete many beautiful works of art during the evenings before his death at Bulloo. He died due to the exhaustive effects of scurvy and dysentery. 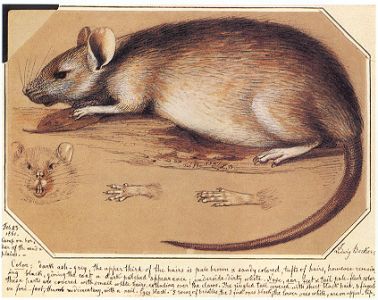 "A Long-Haired or Plague Rat", Ludwig Becker 1861, watercolour.
La Trobe Australian Manuscripts Collection, State Library of Victoria
In the summer of 1860-61 there were masses of these rats in Central Australia.

Early in October 1860 Hermann Beckler (and the camel expert George Landells also) resigned from the expedition when it reached Menindie. Beckler felt by then that the expedition would not succeed and feared the worst. He also felt that without Landells, who could not get along with Burke, the expedition would not be able to use the camels properly. Beckler had lost faith in Burke's leadership abilities. He had not been given much opportunity for botanical collecting and for him the scientific benefits of the expedition, which were the main interest for him, were being forgotten by Burke. Beckler's resignation caused some criticism of him back in Melbourne, accusing him of being weak and suggesting that his career as a doctor would be ruined by his resignation. However, there was support for him in the press also, with commentators claiming that Beckler, an experienced botanical collector in outback Queensland and NSW, would not have resigned without good reason, and that it cast doubts on Burke's leadership skills. Beckler was not sure what he could do next, and thought he wouldn't be popular in Victoria. In a letter to his brother Carl he wrote that even the worst type of life in Australia "was always better than being a medical practitioner in Bavaria." Despite this he returned to Germany in January 1862, where he later worked as a respected doctor in the remote alpine village of Fischen near Bregenz in the Allgäu. Up until 1872 he published articles about Australia in respected German geographic periodicals. Beckler died in 1914.

After the tragic end of the expedition Wilhelm Brahe received a lot of criticism for having left the Cooper's Creek depot before (by chance just a few hours before) Burke, Wills and King arrived back there. In presenting his case to the press and before the Commission of Inquiry he had the advantage of the help of his lawyer brother Alexander. He was able to make clear that he had waited at Cooper's Creek five weeks longer than Burke had ordered him to, and a week longer than Wills had asked him to, and other survivors of the expedition supported him, saying that they had witnessed these verbal instructions from Burke. Brahe was supported by the Melbourne German language newspapers Melbourner Deutsche Zeitung and Germania. They wrote that the English critics, with true "Bulldog rage", had made Brahe look terrible and tried to put all the blame on the innocent Germans in order to make the expedition a British triumph.

Ballarat built a memorial fountain in honour of the dead explorers. After some delays, it was completed in 1867. Unlike the other major memorials in Victoria, the Ballarat fountain included the name of Ludwig Becker. 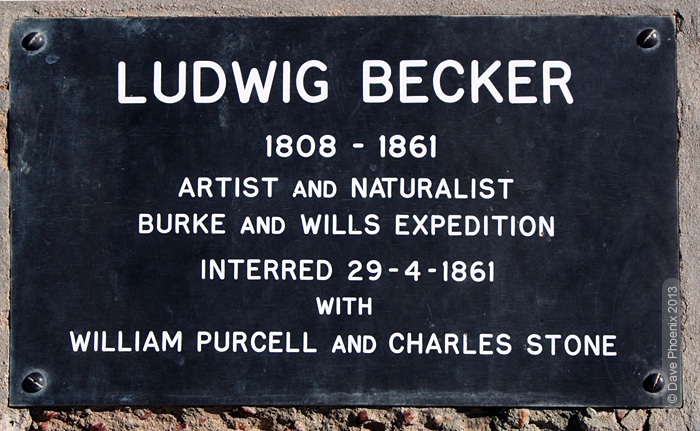 Memorial plaque attached to a concrete cairn, erected in 1983 at the Koorliatto Waterhole on the Bulloo River,
13km south of Cooper Creek. Becker, Purcell and Stone died within a few days of each other.
Photo courtesy of Dave Phoenix. See a photo of the memorial's location via the burkeandwills.net.au website.

The expedition was reported on in Germany; Carl Eduard Meinicke (who had written a detailed book about Australia, published in Germany in 1837) wrote a 26-page article entitled "Burke's Reise durch das centrale Australien", published in Berlin in 1862 in the Zeitschrift der Gesellschaft für Erdkunde.