In the years after Australia’s Federation (1901) Prenzel’s innovative use of Australian floral and faunal motifs in his furniture pieces was very popular, and his clever harmonious blending of native flora and the international Art Nouveau style brought him many commissions, particularly from wealthy families in Melbourne and Victoria’s Western District. Prenzel loved working with a wide variety of Australian timbers and promoted their use for artistic purposes. The two most common types of Australian timber in his work are mountain ash and blackwood. 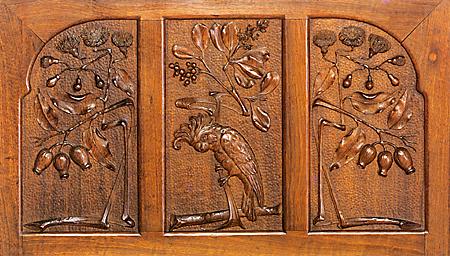 His shields for associations and sporting clubs were also in demand, with their individual styles, Australian motifs and contrasting native timbers. During World War One he produced many Honour Boards for organisations both large and small, however, overall, the anti-German atmosphere of that time, particularly later in the War, was a blow to his career. The amount of work he received after the War declined, though this was due partly to changes in artistic taste in Australia in the post-war years.

Prenzel also produced beautiful carvings for churches – altars, lecterns and pulpits etc. Churches of different denominations commissioned work from him. Prenzel himself was Lutheran, and his work can be seen in the Lutheran churches at Tarrington, Dimboola, Murtoa and Minyip (all western Victoria).

Robert Prenzel died in 1941. A considerable number of German carvers arrived in Australia in the 19th century (some arrived much earlier than Prenzel), but Robert Prenzel is the biggest name amongst them.

Earlier German carvers
Of the German immigrants who arrived in Hobart on the Wilhelmsburg on the 26th August 1855, three were cabinetmakers and carvers:-Ernst Jäger, Wilhelm Borbeck, and Heinrich Hunicke. There were two German carvers employed by Messrs Whitesides and Ware, Hobart and it appears that Whitesides and Son again had several German cabinetmakers working for them at a later date. There was also an Austrian overseer named Bundock at Port Arthur who did some woodcarving. (Source: Dimmack, Kay. 1988. Woodcarving in Tasmania. Queen Victoria Museum and Art Gallery, Launceston.)